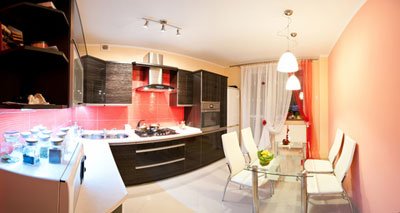 It would be safe to say that the room we spend the most amount of time in is the kitchen. It is with the utmost importance then that this room is properly lit for preparing food, eating, entertaining, doing the dishes or even just nipping in to switch on the microwave.

A mistake that is often made is trying to light the entire room with one single ceiling-mounted fitting. This will only result in overpowering light in the centre of the room and shadows everywhere else. Use one, or even two ceiling pendants to give good general light. The choice is abundant, from semi flush, flush or to give that added wow factor, a designer ceiling pendant. Another idea is to use a ceiling spotlight bar or plate so you can direct light to specific areas.

Using downlighters in the ceiling will also look great and give good general light but avoid placing them in uniformed lines as this will create shadows. Instead, space them out intelligently to give light where needed and in a more irregular pattern because you don’t want your ceiling to look like an airport runway! 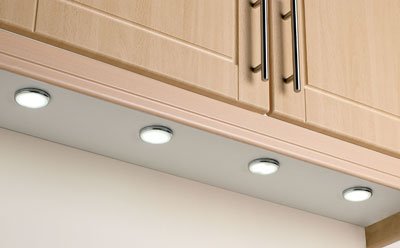 Task lighting in your kitchen should ultimately be your illumination dynamo. Under cabinet lighting is very effective as the optimum placement for task lighting should be between your head and the work surface. You have a few options to choose from here including linkable fluorescent lights, surface or recessed display downlights or something a little bit different like the Endon EL-10018 Enluce LED Triangle Display Downlight.

And finally, don’t overlook the addition of ambient and decorative lighting because this can finish off the final look of a kitchen and add a warm glow that feels cosy and welcoming or a sparkle that is inviting and fun. Again there a few choices here like using adhesive LED strip lights around the kick plate or putting soft lighting in between the top of the cabinet and the ceiling. 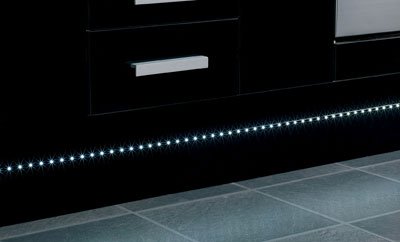 Safe and secure online payments. We do not store your card details.
XWe use cookies on our website to give you the most relevant experience by remembering your preferences and repeat visits. By clicking “Accept”, you consent to the use of ALL the cookies. However you may visit Cookie Settings to provide a controlled consent. Read MoreCookie settingsREJECTACCEPT
Manage consent

Performance cookies are used to understand and analyze the key performance indexes of the website which helps in delivering a better user experience for the visitors.

Analytical cookies are used to understand how visitors interact with the website. These cookies help provide information on metrics the number of visitors, bounce rate, traffic source, etc.

Advertisement cookies are used to provide visitors with relevant ads and marketing campaigns. These cookies track visitors across websites and collect information to provide customized ads.

Other uncategorized cookies are those that are being analyzed and have not been classified into a category as yet.